SAVE 20% OFF NOW While the Offer Lasts! – Download Logo Design Studio Pro INSTANTLY 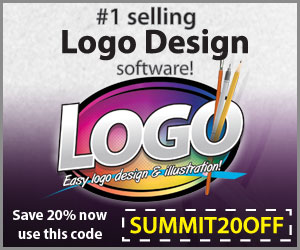 
SummitSoft, as I see it have come a long way from when they first released the logo design software. There used to be a lot of flaws with their older versions but did a really nice job rectifying all of that to bring up this new Logo design studio pro vector Edition.

Now, for those of you who don’t know what a “Vector” image is, Vector images are files made with curves and lines instead of square pixels. To make it even easier to understand, you might have come across some pictures where it becomes fuzzy/blurry when enlarged; well those are caused by pixels. But with vector designs, you won’t encounter this issue.

Logo Design Studio Pro by SummitSoft is as they call it the #1 logo design software at present. Well, I can’t actually argue with it. The reason is that it does a pretty good job with making things much easier and simple to work with. Even a beginner to logo designing could pretty much catch up with the working interface quickly.

As a Content creator, I find Logo design studio pro useful not just for making logos, but almost all kinds of image creation. I personally make use of the logo design studio pro vector edition to make banners, blog pictures, youtube thumbnails etc. The fact that I am able to resize the image without any distortions pleases me a lot.

Few words about its flaws:

Like I mentioned at the beginning of this review, SummitSoft has done a pretty good job in eliminating the flaws it had with its previous versions. One of the main flaws I still find in it is with the changes made while grouping few elements together. When you group the elements you edited, into one element, it tend to reset all the editing done to it. The only way I found around it is to leave the elements independent without grouping them.

Logo design studio pro does a good job at what it is supposed to do. Logos are crisp and clear. I would recommend Logo Design Studio Pro Vector Edition to logo designer, even if he/she is new to logo designing.